Azerbaijan is one of the countries that are generously endowed with a lot of natural resources, and people often come here to improve their health. Infrastructure of resort areas in the republic is growing rapidly, many hotels and boarding houses are being built for every taste and prosperity. The country has a large number of hot mineral springs - "istisu", which, depending on the chemical composition used to treat a number of diseases. For example, a mineral spring in Galaalti is indispensable in the treatment of renal ailments, and the thermal waters of Masalli can save you from a whole bunch of ailments. Another therapeutic factor in Azerbaijan is natural salt. Particularly famous is the salt mountain - Duzdag, in Nakhchivan, where a modern clinic operates. 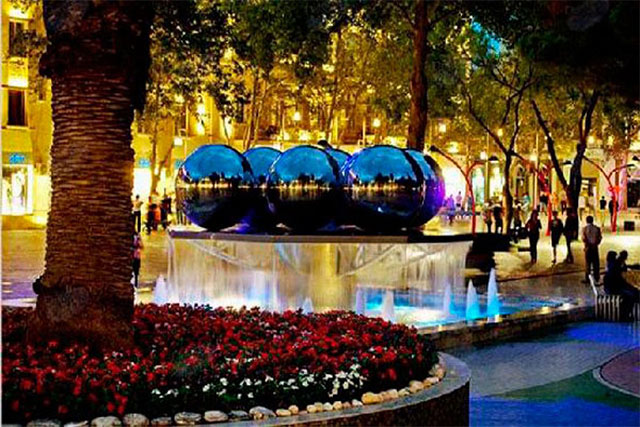 The therapeutic and recreational complex of Galaalti, located at an altitude of 1000 m above sea level in 120 km from Baku in the settlement of Shabran has a long history. In 1969, deposits of medicinal mineral water were discovered here in the foothills of Galaalti, near which a sanatorium was built, which quickly became an all-Union health resort in the USSR. The main therapeutic factor in the complex was a unique bicarbonate sodium-calcium water with the content of organic substances such as Naftusya, which in many respects surpasses its closest analogue - the water of the Ukrainian resort of Truskavets.

Today, the modern medical-recreational complex of Galaalti operates here, which has little in common with that old Soviet sanatorium. Unchanged is one thing - the same unique water, the glory of which continues to grow.

About the healing properties of Naftusya mineral water was known for a long time - the first mention in the literature of its healing effect date back to 1578. One name speaks for itself - it is the only medicinal water in the world with an increased content of organic substances of oil origin. In the forest, 7 water sources are identified, which have a large reserve. The flow rate of water is more than 10,000 liters per minute. Naftusya of this deposit is extremely rich in organic substances, which is the determining indicator of the medicinal properties of the water in this region. The unique natural complex of organic substances possessed by the water of Galaalti makes it the only curative mineral water in the world that has been recognized by many urological doctors of many countries.

The water of Galaalti can be drunk only directly at the source, as it is not subject to storage and transportation, because of the presence of volatile organic substances. The modern medical and diagnostic center of Galaalti, equipped with unique equipment, in which the latest technologies of the national balneology and physiotherapy effectively combine with the best world achievements of medicine, offers all conditions for treatment and recreation.

The most effective water from Galaalti In the treatment of urolithiasis in various forms, gastroenterological and other diseases. In the corridor of the clinic you can see a stand on a wall with dozens of test tubes, in which salt and stones from the kidneys and pancreas of patients are collected, thanks to the impact of this incredible force of water.

Possessing also immunological action, the water renews the defenses of the organism, contributes to the elimination of inflammatory processes in organs and tissues, the excretion of metabolic products and toxic substances, thereby preventing the early aging of the organism.

The complex includes a fashionable 5-star hotel with ample opportunities for organizing leisure activities for guests. It is built right in the thicket of the mountain forest under a rock on which the remains of the once inviolate ancient fortress of Chirag-gala (from the Azeri - tower-lamp) erected in the 4th-6th centuries at an altitude of 1232 meters above sea level stand proudly. 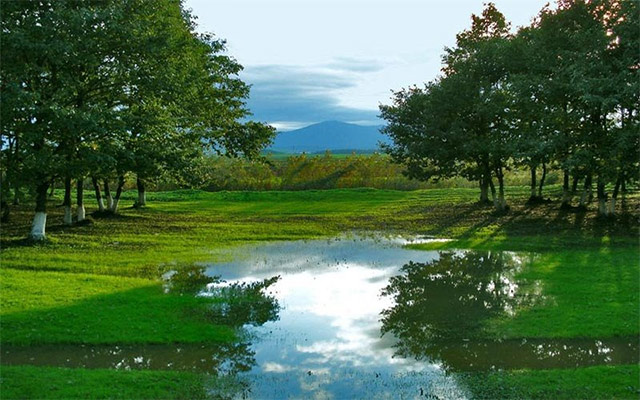 Another region of Azerbaijan - Masalli, has long been famous for its healing springs, the most famous of which is Istisu (literally "warm water"). This thermal spring breaks through in several places on the bank of the Vilyashchay River on the slope of Mount Dombalov above the sea level at 1650 meters. The source has not dried up for many hundreds of years, but no one knows the exact history of its occurrence. People from ancient times considered this water as a panacea for a thousand diseases.

In 1960, a scientist, doctor Mir Kazym Aslanly-Sareng established that this water includes hydrogen sulphite, calcium sodium chlorine, magnesium hydroxy carbon, iodine (30 milligrams per liter). Water comes from a depth of 90-250 m in hot form (about 69 degrees) and is indicated in the treatment of many diseases. Such as rheumatism and its consequences, sciatica, skin, kidney and urinary tract diseases. etc. In this treatment should be carried out under special instructions and under the supervision of a doctor. One course should consist of 10-15 therapeutic baths.

This discovery of Aslanly-Sareng caused great interest. From the state side, twelve scientists from specialized clinics and leading scientific centers from all over the Soviet Union were invited to the healing source of Istisu, who confirmed the findings of Aslanly-Sareng. After that, in 1971, the healing source was given the status of a national health resort and began to be intensively mastered.

Today this sanatorium is called "Fatimei-Zahra" and continues to receive visitors. All procedures are conducted under the supervision of doctors. On arrival, every guest gets a spa book, which indicates the diagnosis and details the procedures shown.

In "Fatimei-Zahra" you can not only get a full treatment, but also have a good rest. For example, relax in the waters of the Vilyashchay river. On one of the sections of the river the waters of the thermal spring, falling on the rocks, mix with the cool waters of the river, forming something like natural warm baths. Here in the water everywhere there are small brisk fish that pinch bathers for open skin areas. It is believed that they also contribute to cure for skin diseases.

Nearby on another part of the river there is a natural source of healing water, nicknamed "mada", which in Azerbaijani means "stomach". As you probably already guessed, the water from this source is shown in diseases of the gastrointestinal tract. It is curious that this source was chosen by small harmless crabs, which are hiding here almost under each stone.

Not far from the sources of Istisu, at the foot of the Yanar Dağ mountain, there is another sanatorium. From the Azerbaijani language Yanar Dağ translates as "burning mountain". And, indeed, if you climb up a mountain of narrow steps leading to the top (somebody counted at least 256), then an amazing picture will open up: flames, bursting straight from the ground. It is glowing with natural gases accumulating here for centuries.

However, it is not necessary to climb so high as to see a miracle: on the territory of the sanatorium you will find an equally surprising natural phenomenon - Yanar Bulağ ("burning spring"). Its nature also lies in the gases that escape to the surface of the earth along with the thermal water. Red tongues of flame circling above a sulfur source in eternal dance. The water temperature in this source is higher than in the sources located in the nearby sanatorium "Fatimei-Zahra" and is 76 degrees. Water is pre-collected in a tank, where it is cooled to an acceptable temperature for the human body (34-36 degrees), from where it is delivered to rooms with baths and mini pools.

The water in Yanar Bulağ is saturated with sulfides (hydrogen sulphide), calcium, sodium, chlorine and its compounds, iodine, magnesium, methane and other elements that have a beneficial effect on the body and are indispensable in the treatment of hypertension, liver and biliary tract diseases, gastrointestinal diseases, hemorrhoids, arthritis and other disorders. 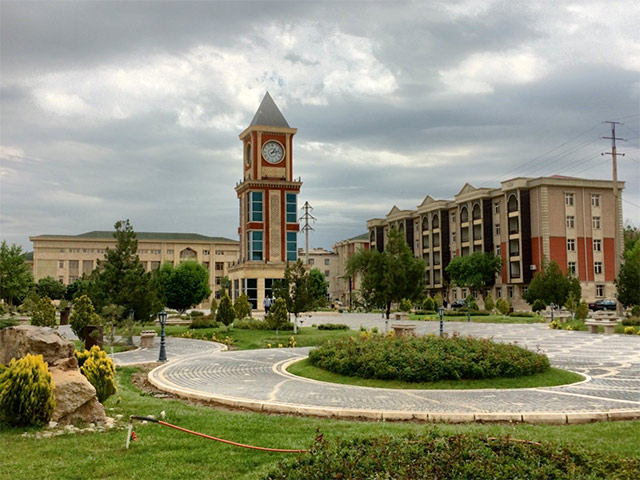 According to the World Health Organization, about 15 million people worldwide suffer from bronchial asthma. Treatment of many diseases, including asthma, is more effective in the conditions of the salt mine, i.e. speleotherapy (in Greek "spelain" - a cave). Such mines operate in Poland in the city of Krakow, in Ukraine in the village of Solotvino, Uzhgorod and in Azerbaijan in the city of Nakhchivan.

Being one of the symbols of Nakhchivan and having natural reserves of salt, numbering 90 million tons, Duzdag (Salt Mountain) also has medicinal properties. In Duzdag all conditions for reception of having a rest are created. In particular, here is the famous Duzdağ complex, which has its own hotel and physiotherapy center.

The hospital of the Center consists of the aboveground and underground parts. The first is located in Duzdag and in the hotel Duzdağ, and the second - under the mountain at a depth of 300 meters from the entrance to the second main mining workshop of saline mines. The hospital, located in the hotel Duzdağ, consists of five galleries, which houses wards with bunks, there is a cafeteria, a TV lounge, a library.

The treatment of patients is carried out under the supervision of medical personnel. In the underground clinic patients of all ages can be treated. However, one must take into account that the treatment courses differ from each other. Children live in the hospital for 8 days, and adults - 16 days. The salt mines present here have an antiallergenic environment. This is due to the fact that in the underground department in all seasons the temperature fluctuates between 18.5-20 degrees, therefore the treatment can be carried out all year round. After the end of the course in adults, 65-70% is observed, and in children 80-85% of health improvement.

During the day, you can relax in the hotel's comfortable rooms: relieve stress and fatigue by visiting the water park, outdoor and indoor swimming pools, basketball, football courts, tennis courts and fitness centers.

Note that the salt of Nakhchivan differs from sea salt. The original Nakhchivan salt is ecologically clean, it does not contain heavy minerals, and it has medicinal properties. Magnesia in the composition of Nakhchivan's salt makes it possible to use it also for the treatment of patients with cardiovascular diseases.

The exploitation of the Duzdag field began around the 3rd millennium BC. In this land there are still ancient mines, where salt was extracted manually and was transported by horse. The industrial extraction of Duzdag salt began in 1927. Now here the annual production of salt is 6-8 thousand tons. The processed salt is realized in crystalline and crushed forms. In production workshops, 66 grams of iodine are added to one ton of ground salt to prevent thyroid diseases.